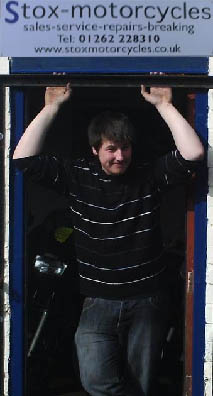 Two little boys played in the streets of Bridlington, kicking and throwing stones. They grew and went to Headlands School where education and opportunity were offered to them. Neither saw the merit in this offer and both gazed out of the window while their teacher despaired at his gift going to waste. The boys left school as soon as the law permitted them to do so.

I’m not a psychologist, I wish I was. If I was I would tell you why one boy stole one of my motorbikes while the other repairs my motorbikes. Why one invokes sympathy the other empathy. The most obvious difference between these boys is passion. Only one of these boys found passion and it all began when, as a 4 year old boy his father took him on the back of a late 1970’s Honda Superdream.

The moment he followed his father’s lean into their first bend, something within the boy connected the dots. He and the motorbike were one, so natural, so easy and so exciting. When he stared out of the classroom window he was miles away, he was on a twisting road with his knee down. The frustrated teacher interrupted his daydreaming one day and asked, “What is going to become of you lad?” Without taking his eyes from a passing Kawasaki GTR 1000, he replied, “I am going to own a motorbike shop.”

This boy with a future was Dave Stead who went from supplier and fixer of mini-motos and off-roaders to fellow pupils to businessman at 21. His journey was challenging, frightening, exciting and very quick. That’s motorbikes for you.

On leaving school Dave went to Carnaby College to learn his trade. Having completed levels one and two the course was discontinued; level three the final level was not offered. Dave travelled to Doncaster to complete his final level. By this time he had long since passed his car and bike tests and Doncaster wasn’t very far on his Honda CB500.

While at college he worked as a mechanic for Mayhem who trained and still train motorcyclists in the fine art of sharing tarmac with those who have twice as many wheels and half as much road sense. At 19 Dave was offered the chance to work at Rojos, a motorcycle dealer with a franchise and fully equipped facilities. What could possibly go wrong?

When riding a motorcycle you’re always looking for that pothole and just when life couldn’t get any better for Dave a pothole came out of nowhere. Rojos owner announced that in 3 months he would take a well-earned retirement and the business would cease trading. For Dave at just 20 this was devastating news and his initial reaction was one of despondency. His next reaction was to put his future in his own hands. He would not ‘sign on’ and let a well meaning Job Centre Plus employee tell him about the shelf stacking vacancy at Tescos and that, if he applied himself, he might just be the lad for the job. No, he would start his own motorcycle business as he had told his teacher he would only 5 years earlier.

Dave left Rojos in November 2010 and by February 2011 he was up and running in partnership with a long time family friend. Stead and Wilcox imaginatively became Stox Motorcycles. With his girlfriend Sarah and his parents offering their support the business got off the starting blocks. Dave was very quick to benefit from the cheapest and best advertising a new business can have; word of mouth. Soon ailing bikes were arriving at 15A St. John’s Street in a steady stream and were just as quickly leaving with a new lease of life. Bikes were also being bought and sold on a regular basis.

Stox Motorcycles is nearing the end of a challenging first year and will grow into its second year in very good shape as a respected and established business.

How did a daydreamer become a motorcycle mechanic and businessman by the age of 21 while his fellow pupil slipped effortlessly through the net, in all probability to become permanently disenfranchised, never feeling the pride of achievement and ownership?

How did it happen this way? The answer is passion. The Honda Superdream was indeed a life changing motorbike.